µ: of transfiguration x resonance - the new rework ep - out on all digital platforms

I’m over the moon releasing the new Philipp Rumsch Ensemble reworks EP 'µ: of transfiguration x resonance' into the world today: Four tracks that cast new light on the original material of the 2020 album 'µ: of anxiety x discernment'.

You can stream it via your favorite platform or purchase a hi-fi download via bandcamp.

I’m beyond grateful for this amazing cast of artists that contributed to this EP: You’re an absolutely dream lineup and I’m still very moved when listening through the tracks they produced. I'm thankful for their energy, patience, love and friendship.

Moreover, this release is a premiere in two respects:

For a start, this release is the first record I had the pleasure to do the mastering for. Having the chance to work on this at Valgeir Sigurðsson's Greenhouse Studios in Reykjavík last year was a true gift. Secondly, 'µ: of transfiguration x resonance' is the first release on my newly created label / production platform 'nynode intermedia' that will serve as a hub for upcoming interdisciplinary and collaborative projects.

I hope you enjoy listening to these wonderful reworks as much as I do. Looking forward to hear and read your thoughts on the release.

(or write me on FB or IG, shop on my website will be online soon)

Although it seems a little strange releasing a record in a time where the whole world is confronted by multiple challenges and crises I’m moved that this album is out from this day on. I created a folder on my computer entitled simply ‚µ‘ on 27 December 2017 without knowing that this folder would be the center of work for the next 2.5 years.

During this period of time this project has made many changes and became one of the most far-reaching and stirring things I was lucky to do.

On this recorded I wanted to find out, what’s behind this complex emotional state of anxiety - how it’s evolving and revealing itself and what’s the opposite force to it. Not in a personal but more in a generally applicable way to create something that hopefully a lot of people who will listen to the music can identify with.

Besides that I’m still thrilled having the opportunity to produce an album which is partly recorded with dummy heads in binaural audio. That was one of the fascinating experiences - both in making and listening to the recordings.

By saying that recording this album was one of the most moving things I ever experienced it’s because of the wonderful people that were and are involved. It’s hard to put into words what everybody of the following people put into this ensemble during the last years but I can say (or write) for sure that it’s the greatest gift having you around me.

First of all the most thankful thoughts to Erik Leuthäuser, Lisa Zwinzscher, Matti Oehl, Johannes Moritz, Vincent Hahn, Georg Demel, Antonia Hausmann, Franziska Ludwig, Volker Heuken, Markus Rom, Paul Brauner, Christian Dähne, Maximilian Stadtfeld, Philipp Rohmer and Arpen who put their unique sounds and voices on the record. Spending your days learning, playing and recording the music plus being there at my side all the time is something I couldn’t be more thankful of. Also there are a bunch of other people that played live with the ensemble during the last years and are an important part of this project and ensemble.

Thanks to Nico Teichmann for being part of this ensemble, recoding and mixing it live and in the studio and for going with all my process and thoughts. There are so many great sound details in the record that came through Nico which I hope you like as much as I do!

Thanks to Axel Reinemer, Zé Victor Torelli, Marian Hafenstein and Thomas Eisfeld for letting us record at your wonderful Jazzanova Recording studio and making it such a comfortable and warm-hearted space.

The album wouldn’t in the slightest sound that great without the amazing skills that the guys from Zodiaque (Markus Abendroth and Peter Thomas) and Valgeir Sigurðsson put into this record by mixing and mastering it.

I am also very thankful for the people that realized the visual concept: Jennifer Ressel for the very exceptional photos (as well as the process behind it) and Andi Rueckel for another great workflow and outcome regarding the artwork.

Robert Schulz, Luise Brandenburger, Kerstin Mayer, Daniel Deppe and everybody at Initiative Musik, the Cultural Office of the City of Leipzig and the student council of the University of Music and Theater Leipzig for the financial and non-material support - without you we wouldn’t had the chance to bring those ideas into life (and on an album, of course).

Thanks to Anna Cirkel and Jasmin Sennhenn for your translating competence during my writing process.

Annika Sautter for supporting me regarding the organizational part of this project.

Everybody at Denovali Records for giving this music a platform and believing in this crazy utopia and to 9PR and Teleskop for spreading it.

Last but not least to all my friends and family for taking good care of me during these 2.5 years.

I would be tremendously honored if the love and energy we all put into this record is to be felt when listening to it and maybe it can make those difficult times a little more bearable.

Thank you and stay safe. 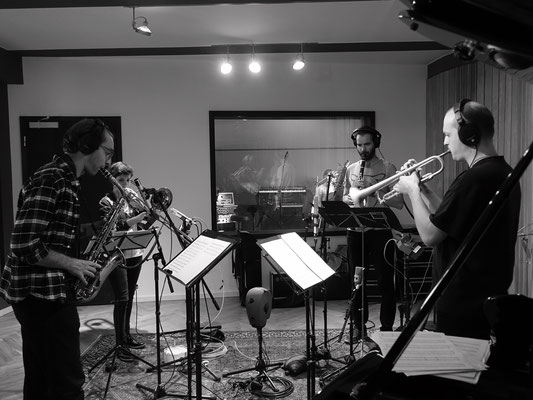 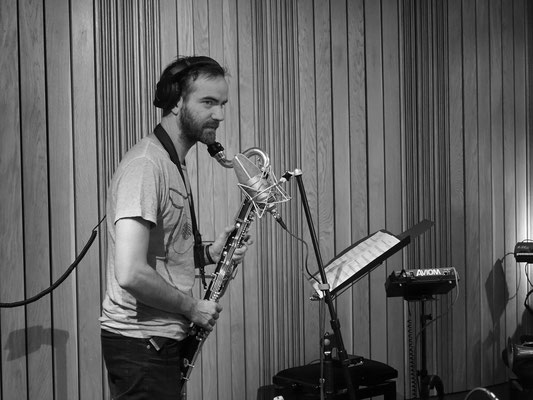 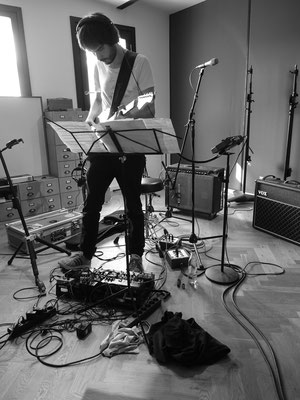 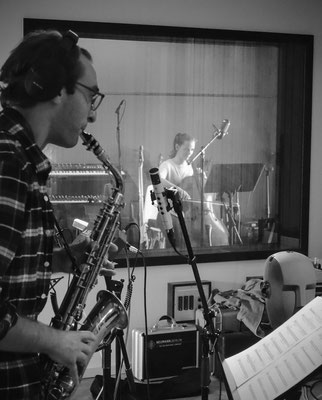 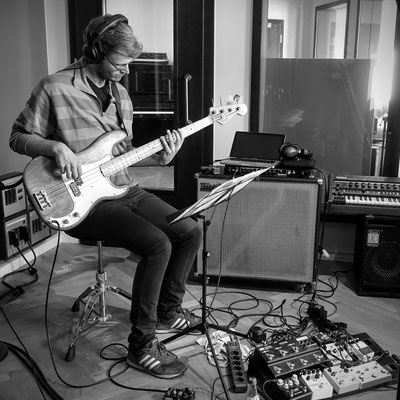 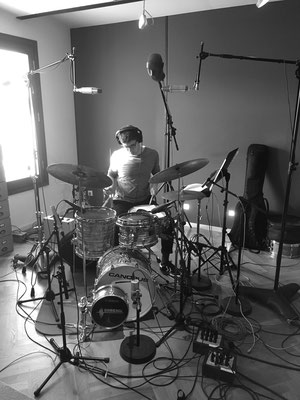 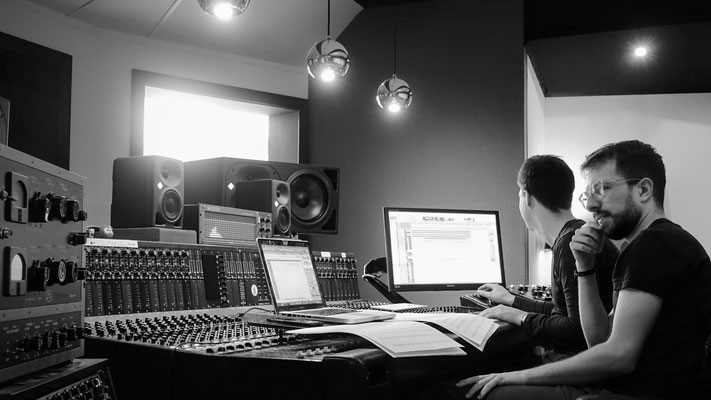 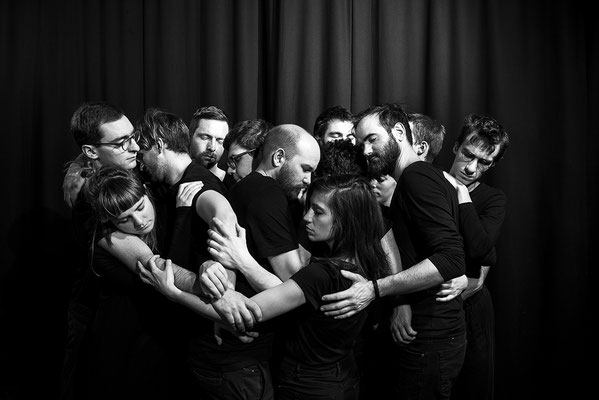 Today I have the pleasure to announce the second album of my ensemble. It will be released on March 27 via Denovali on CD | LP | digital.

During the last two years I wrote the lyrics and music for this album in which I aimed for developing a multi-dimensional picture of the state of anxiety. The album was partly recorded in binaural audio done with special dummy heads.

You can listen to the first track preview on Soundcloud now. I’m looking forward to share more with you in the next days.

The production of µ: of anxiety x discernment has been supported by Initiative Musik gGmbH with project funds from the Federal Government Commissioner for Culture and the Media.

Today, the second album with | out by moment's concept comes out. This record is documenting the past three years as well as the external and internal conditions that were influencing our work during that period. with | out was recorded at Monochrom Studios in Poland. The album was mixed and mastered by Adrian von Ripka at the renowned Bauer Studios in Ludwigsburg.

The final part of our live video trilogy shot at UT Connewitz last February is out now. Each video approaches different aspects of the concert we played that day. Whereas prologue is a short concert movie, part I embodies a classic live video. However, part IV was done in one take with only one camera. Thanks to tobiasschuetze.de and Toni Propeller Musikfotografie for the video and to Nico Teichmann for the sound.

You can find all videos here.

Happy Release Day! 'yesterday still lies between the floorboards' by Arta Jēkabsone and Erik Leuthäuser is out now via Unit Records. I had the pleasure to contribute synths and electronics on some of the tracks of this beautiful album. Have a listen!

You can find more information here.

It’s official - I’m going to receive this year’s Jazznachwuchspreis (award for young jazz musicians) of the city of Leipzig, funded by Marion Ermer foundation. You can find the official press release here (in German).

I’m still overwhelmed and incredibly thankful for all the support I receive from many people and institutions. However, the most important people are those who bring this lunatic idea of a large ensemble to life with unbelievable commitment and selflessness:

Many thanks to Georg Demel | Lisa Zwinzscher | Joshua Lutz | Philipp Rohmer | Philipp Scholz | Sebastian Wehle - for supporting the project with regularity and overwhelming dedication as well as to many other people who were part of this exciting journey. Last but not least thanks to Denovali for being such an important part within this crazy thing.

By playing a laureate concert with my ensemble we'll have the fortunate opportunity of opening the Leipzig Jazzfestival - 11th october at UT Connewitz (Tickets / infos available here).

I would be tremendously happy to meet a lot of you there.

My acknowledgements are going to you as well as to a lot of other companions. Hugs, Philipp

Second video from our concert at UT Connewitz, Leipzig out now via Denovali.

Thanks to everybody who were with us that evening.

New video out on Youtube via Denovali. Filmed and recorded 21 February 2018 at UT Connewitz, Leipzig.

Shot and cut by Tobias Schütze.